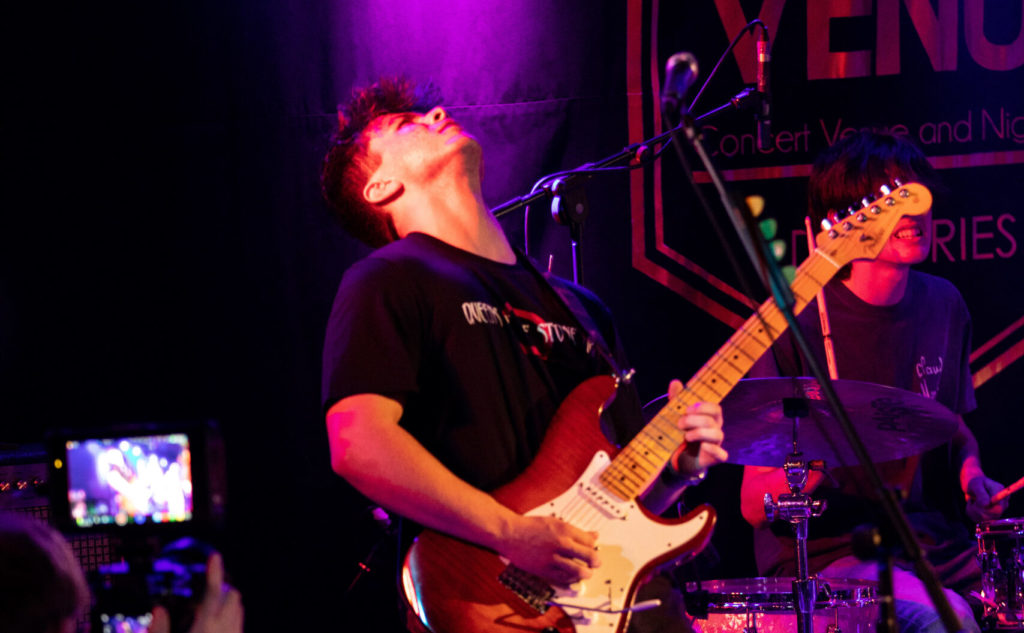 Sounds of Stage iT

Sounds of Stage iT is a celebration of the musicianship and creativity of the young people across Dumfries and Galloway. We are inviting our communities to come together to support young musicians as they perform a night of live music, showcasing their talent and reaching new audiences. Headlining the event will be local rock band TORRS with support coming from RA, Lewis and Sarah and Shaunie Craig.

TORRS are a young alternative, indie-rock band from Stewartry and Dumfries who are hitting the Southwest of Scotland with a bang!

The boys’ first gig was in 2017 when they played at an Open Mic night at the Catstrand in New Galloway. They played covers of bands like Gun n Roses and Nirvana and were known as Pure Silver.

They have since went on to play various gigs and festivals in Dumfries and Galloway. They have supported bands like The Lutras and up and coming rock band Tomorrow is Lost. TORRS won a battle of the bands and gained a slot at the 2020 Eden Festival and were due to take part in Parkfest 2020. The boys have been regulars at Dumfries Market Festival, Kirkcudbright Art and Crafts Trail and D&G Youth Big Day Out in Castle Douglas. More recently they performed at Parkfest 2021 and at The Vault Arts Centre supporting She Burns Read and then supporting A Ritual Spirit.

Ra is a singer, songwriter and multi-instrumentalist from Dumfries, Scotland. Since the launch of her solo career in 2019, marked by the release of her self-produced EP ‘Strange Love’, Ra has performed at gigs and festivals across the region and beyond, establishing a reputation as a convincing and compelling performer.

Ra won the Rising Star Award at the Ukulele Festival of Scotland in 2019, and was shortlisted for Best Breakthrough Artist in UKE Magazine in 2021.

Her eclectic mix of complex multi-track YouTube covers – ranging from The Cure to Eminem – have garnered an active online following and were released as an album in early 2021.

Ra is also known for collaborating with Billboard-charting electronic synthwave artist ALEX on a number of successful singles, including ’Broadway’, which surpassed 1.6 million streams on Spotify and was featured in season two of Netflix’s Locke & Key.

Lewis plays accordion and spent years performing in school concerts and choirs and concerts. He has since performed with groups in Paragon Music’s YouTube Live-streamed events Resonate and Boogie and Let’s Go!

Sarah, a multi-instrumentalist, has performed at many occasions with Paragon Music over the years at festivals and venues including Youth Beatz, The Usual Place, The Theatre Royal, The Stove and The Tron Theatre.

Lewis and Sarah will perform an original piece of music created and performed by new duo Lewis and Sarah. A collaboration that came from Lewis hearing and loving Sarah’s recent piece ‘Calm Over Caerlaverock’. This new, evolutionary, piece connects 2 musicians and their love of nature. Exploring the themes of water and wildlife, the piece will include glockenspiel, chimes, accordion and vocals.

Shaunie is a solo singer-songwriter who has spent the last few years honing her craft, appearing around the region at different events performing a mix of her own material and some well-known covers. She has won awards at several Burns competitions, placing for both singing and her guitar instrumental.

Some of her most notable shows to date were performing at Hoddom Castle, Busk Stop and Ramp the Ruins.

Our Stage iT programme, for young people, by young people is kindly sponsored by DYW Dumfries & Galloway: