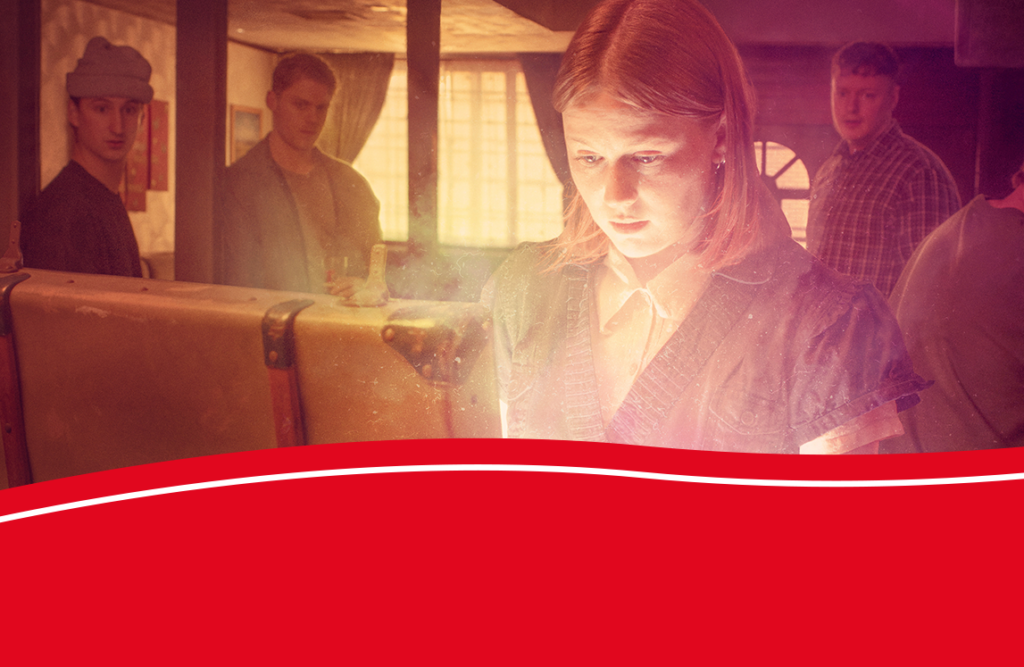 We are announcing our 2022 Autumn/Winter year-round Arts Live programme with incredible full scale theatre productions and outdoor performances in communities across our region.

Arts Live is our year-round performance programme featuring theatre, music, dance, comedy and spoken word at the heart of communities across Dumfries & Galloway.

First up in our new and exciting programme of events Alice Mary Cooper presents her new show The Bush following the success of her previous solo work Waves, described by The Observer as ‘a miniaturist gem’.

In this one woman performance, Alice recalls the inspiring true story of 13, 1970’s housewives who battled for 10 years to save bushland in her native Sydney – starting a nationwide movement of Green Bans, protecting land and the natural environment from destruction across Australia.

The show is a timely celebration of community environmental action that promises to entertain, encourage and empower and will be heading to the Crichton Estate on 1st August, Gracefield Arts Centre on 3rd August and Market Hill, Castle Douglas on Friday 5th August.

Lost in Music from Magnetic North will be heading to the Theatre Royal Dumfries on 22nd September and is a new gig theatre show inspired by the myth of Orpheus and Eurydice: the story of a talented musical couple’s journey to hell and back. It’s a tale of music which has been told and retold for thousands of years; in Lost in Music, it’s told using the voices of young musicians, telling us what music means to them and how it informs their lives, friendships and sense of self.

The team will also be supporting Paragon as a network member to promote their conference, All In: Access and Inclusion in the Arts. This is the region’s first conference focussing on inclusive and accessible practice and policies in the arts, bringing an opportunity to establish a network of organisations committed to a more inclusive D&G. With live performances from artists with lived experience of the barriers preventing participation on the 7th October at the CatStrand, New Galloway.

Performance Collective will be presenting their show in October that was commissioned by the Dumfries & Galloway Arts Festival before lockdown in 2020, Unsupervised Adulting. A ferocious physical theatre comedy about a dreary working week. This athletic production is performed by the West of Scotland’s finest young talents in an hour’s jaunt navigating adult responsibility whilst holding on to a childlike play.

Their production is non-verbal and all storytelling is delivered through movement. As such, the production is suitable for d/Deaf audience members.

Wonder Fools are heading back to the region after their successful tour of Dumfries & Galloway in 2021 with their highly acclaimed show Along Came the Nightjars, this time bringing their incredibly insightful show 549: Scots of the Spanish Civil War.

The show follows people of contrasting backgrounds, ideologies and religions all spurred on by their burning passion for equality and freedom who formed the Scottish ranks of the Spanish Civil War’s legendary International Brigade.

Told from a small pub in Prestonpans, East Lothian, four millennials are told a story and in a divided 2022 it brings us back to a story of four miners who gave up everything that was familiar for a land that was not, for a people they had never met and for a cause they believed was right. The show will be performed at Castle Douglas Town Hall on 25th and 26th October and Moffat Town Hall on 27th October.

Jordan & Skinner will also present The Time Machine: A Radical Feminist Retelling at the CatStrand on 9th November. A story about The Bunker. The apocalypse is coming and it’s coming for you. In a secret bunker, a group of feminists are taking matters into their own hands as they contemplate impending doom and ask if it’s all to late to turn things around.

Meanwhile, a traveller lands in the year 802.701 to discover the fate of future humans and tries to unravel how it all came down to this. Join this fiery and furious company of extremists for a tale of time travel, survival and human evolution in a bold and irreverent reimagining of H.G. Wells science fiction classic.

Dumfries & Galloway Arts Festival will also present their all new Symposium event on the 24th November at Easterbrook Hall, reflecting on what the future of Arts Live looks like and they want your input. The day will feature open-space discussions about the performing arts sector in Dumfries & Galloway, guest speakers from local and national organisations, outdoor performances from local artists and opportunities to network.

After a successful 2022 10 Day Festival in May, the team are excited to present a dynamic and ambitious programme of events across Dumfries & Galloway and get communities involved in the future of performing arts.

Tickets for all shows can be purchased on their website www.dgartsfestival.org.uk

We gratefully acknowledge the support of our funders, sponsors and supporters. We rely on the generosity of our funders, sponsors, members, patrons and donors to continue our work creating a future for performing arts in Dumfries & Galloway. Visit our website for more details on how to support our work or become a member: www.dgartsfestival.org.uk/support-our-festival.